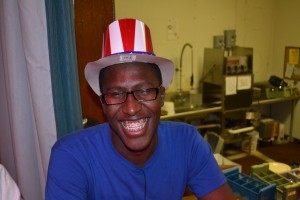 Beginning September 1, UNC announced a new voter registration initiative across the agency and Lackawanna County. “Encouraging civic engagement is an important part of the mission of United Neighborhood Centers,” said Michael Hanley. “There is no more effective means of civic engagement than the ballot box.” The agency has been actively registering voters at all ten centers and is approaching 100 community members who will now be able to be a part of the upcoming Election Day. Additionally, UNC has also been helping community members register to vote in all City of Scranton public housing developments in collaboration with Friends of the Poor and working to coordinate transportation to the polls on the day of the elections for anyone who needs assistance. UNC’s voter registration drive will continue through Tuesday, October 9. However, on September 25, the agency celebrated National Voter Registration Day with more than 1000 other non-profits across the country. A rally was held at the West Side Senior Center with over 60 in attendance and speakers included Andrea Mulrine, the President of the League of Women Voters of Lackawanna County, and Attorney Bill Fisher. A trivia contest was emceed by Gary Drapek, President of the United Way of Lackawanna County, which was won by UNC’s childcare team.