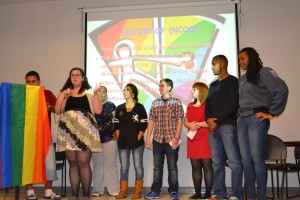 United Neighborhood Centers teen LGBTQ advocacy group, the True Colors Alliance, partnered with the Lackawanna College PRIDE group on October 11 to showcase a forum on bullying for the community. October 11 is National Coming Out Day, signifying the anniversary of the gay rights march in Washington, D.C. in 1987. The seminar started off by depicting skits of various types of bullying including physical, verbal and cyberbullying, as well as the announcement of current bullying statistics. In addition, seven members of the PRIDE group stood up to tell their “coming out” story or why they choose to be an ally of the LGBTQ community. Lastly, guest speaker Wayne LaForm spoke about his experience growing up, moving to New York City and getting married. The event hosted over 50 students from local high schools and colleges. The partnership between UNC and Lackawanna College was created by Michael DeJesus, who was previously an active participant in the agency’s youth groups and is now a freshman at the college. The bullying seminar was made possible through a grant from the national organization Advocates for Youth, who chose to fund the True Colors Alliance for a second year in a row after they were impressed with their public service announcement campaign earlier in the 2012.