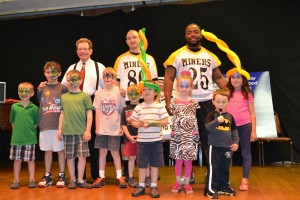 On May 10, Leadership Lackawanna hosted the “A Raising Race” to benefit UNC. The race was based upon the television show the Amazing Race and started at the Scranton Iron Furnaces. From there, the groups had to complete tasks such as climbing the rock wall at Bellevue, ballroom dance with an older adult, or perform an act from a play with some of teens in the Spotlight Youth Theater program. After the race, a birthday celebration in honor of UNC’s 90th anniversary was held at the West Side Senior Center where Damien the Magician performed and other kids activities were held. The Leadership Lackawanna team also purchased a new flat screen TV for the WSSC.