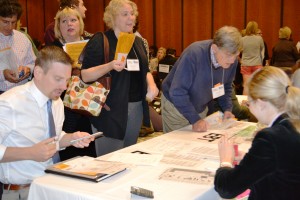 United Neighborhood Centers hosted its third event in celebration of its 90th anniversary on September 13. In partnership with the University of Scranton and PNC Bank, UNC coordinated a poverty simulation that was host to over 75 local community leaders, students and staff. The simulation was meant for participants to experience what it is like to live a month in poverty. Each participant was given a role for the day— be that a small child with ADD, a grandmother raising her grandchildren, or a homeless, single mother. The day was split into four 15 minute sessions each meant to represent a week in time. Participants had to earn money, pay bills and take their children to school, among many other activities. After the simulation was over, Father Quinn of the University addressed the crowd and an informative and lively Q&A was held where those taking part voiced their frustrations on how hard it was to “survive”. The final event of the year will be a 90th Anniversary Celebration honoring Andrew Hailstone, State Senator John Blake and PNC Bank on December 5 at the Scranton Cultural Center.