UNC breaks ground on Oppenheim Center for the Arts 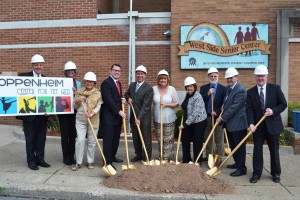 On Friday, September 12, UNC hosted a groundbreaking ceremony for its new youth arts center which will be named the Oppenheim Center for the Arts. Local officials including Scranton Mayor Bill Courtwright, State Senator John Blake and Representative Marty Flynn attended the event. UNC has raised $630,000 towards the overall costs of $800,000 for the center. The building, when complete in January 2015, will include a new auditorium, new HVAC system, a dance/fitness studio, pottery room, recording studio, media room and much more.